This text comes from placards posted for visitors to the old church in Neuenfelde, Germany.

Because the third mile of the Altes Land (east of the Elbe) was settled in an ancient river valley, the Saxon settlers built their church on the highest point for miles, the “church dune.” It offered everyone refuge when floods covered the land, most recently in the flood catastrophe of 16. and 17. February 1962. It is unknown when the old church was built. From it remains the baptismal font in the vestibule and the gravestone of a Priest Johannes from 1507, which is now located in the south wall.

As the community grew, the old church became too small. Under the pastor and provost Johann Hinrich von Finckh (whose picture hangs on the north wall) it was decided in 1677 that a new church be built. After two years all the permits were approved, and after three more years the money for the new church was all collected, in the most part from the sale of seats in the new church. In 1682 the building proceeded easily. The old church was torn down, on 23. May the cornerstone for the present church was laid, and soon on the first Sunday of Advent, 3. December of the same year, the first worship was celebrated in the new church. This record build time was only possible because the build-master Matthias Wedel from Stade employed four building firms to work simultaneously.

The uniformly Baroque decor makes the church attractive; it wasn’t done over hundreds of years but came together in only fifty years. The baptismal font of 1683, probably made in Hamburg, replaced the old baptismal font (now in the vestibule). The crest on top, in today’s form not on the cover – stood until 1954 as the overhang of the pulpit. In the baptismal bowl is told the history of the fall from grace; the crest shows Christ with the world in his hand (“To me is given all power in heaven and on earth; therefore go and make disciples of all men, baptize them…”) [Matthew 28:19] and in two layers underneath are the twelve apostles. 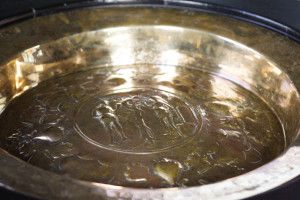 The Hamburg wood carver Christian Precht built the altar from 1686 to 1688, though generally he worked in Stade [three miles away]. The altar is an extraordinary early example of altars on the south shore of the Elbe. The picture is a riddle; there is no Last Supper or crucifixion. [Is my German failing me here? Original: Das Bildprogramm gibt Rätsel auf; so fehlen eine Abendmahls – wie eine Kreuzigungsdarsettlung.] 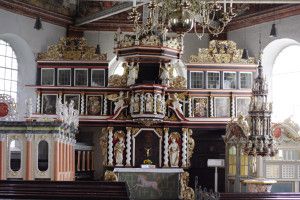 On the pulpit gallery are the church chairs for the family of the provost von Finckh (north) and the family of the organ builder Arp Schnitger (south). His signature mark showed a compass, work of the organ builder, to whom an arm reaches out of the clouds. Schnitgers avowal: My handiwork that makes me world famous is a gift from heaven. The organ builder Arp Schnitger, 1648-1719, working before this in Stade, was involved from the beginning of the build. He planned the very high place of the organ and built 1683-1689 a still world famous organ with 34 registers in the main body, manual auxiliary and pedals. He married a woman from Neuenfelde and remained here as a community member and was buried in the church (a grave marker in the north door remembers him). 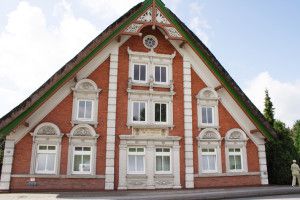 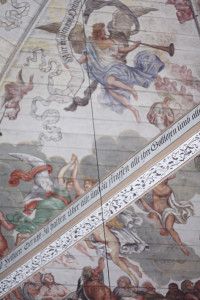 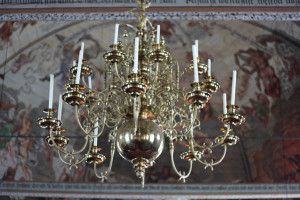 Candelabrum in the church in Neuenfelde.

–The brightly colored chairs in the north side from 1729, where many community members sat. The “Bunten Stühle” were crowned by eight virtues: facing the church, the four cardinal virtues of antiquity; self-control, bravery, wisdom, and justice; facing the altar the three Christly virtues of love, faith, and hope – and here is a fourth, patience. Opposite in the south stand the lectern and pastor’s chair of 1730 and the provost’s chir of 1731.

The altar vestments are modern. The unicorn on the green hanging is an ancient symbol of Christ: the unicorn is the strongest of all animals, no hunter can capture it, only in the embrace of a virgin will it let itself rest — a reference to the son of God, who became human from a virgin, the holy one, the “unicorn of the holy,” which with unbeatable power even tears apart the bonds of death. The pelican on the white hanging is also a reminder of Christ: as the pelican feeds its young with its own heart’s blood, so Christ gave his life on the cross, so we can live  through him. 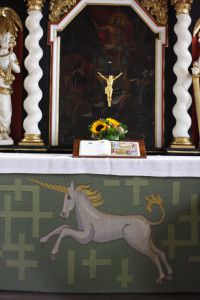 The old church tower fell victim to lightning in 1786; today’s church spire from 1841 with its height of 39,60 meters protrudes into the flight corridor of the Finkenwerder firm Messerschmidt-Bölkow-Blohm and therefore sports a red flight warning light. 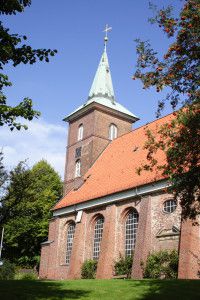 Around the church sits the old graveyard, which until our century served the people of Hasselwerder and Nincop (in 1927 united with Neuenfelde) and Francop as a resting place for their dead; the old sundial there warns: “you do not know the day or the hour…” 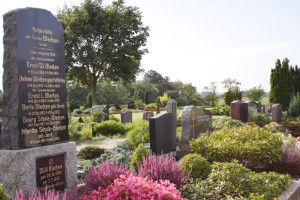 Cemetery around the Neuenfelde church