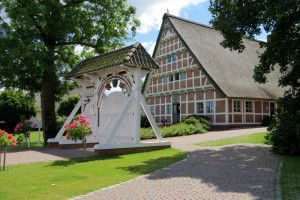 “Puurten” is Plattdeutsch dialect for the German “Pforte,” which means gate, or portal. The Quast family owned this land from at least 1720 to 1970 when Julius Quast wrote the following account:

Jacob Quast, named in the male population list of Nincop in 1691 and in the militia roll of 1710, was called the Nincop Judge and lived on the farm in Nincop that is owned by Hinrich Köpcke today (vastly reduced in size). It can be demonstrably verified that he held this office from at least 1677 to his death on 18 March 1716. He was 81 years old. Jacob Quast was a highly respected figure in his time. His name is mentioned in many documents. At the time of the construction of the Neuenfelde church (1682) he was also the administrator of oaths. His name can still be read on a beam behind the altar.

Two particularly valuable documents from those available are especially important for our family history. They are therefore reproduced below in full.

The available records show that Jacob Quast was married twice. From the first marriage came his son Hinrich, named in the “Designation of the fathers’ and sons’ names and ages in the Hasselwerder Altes Land parish house” of 15 June 1682. It says under Nincop:

“Jacob Quast, the judge and oath administrator of this church is 47 years old. Has one son Hinrich, 18 years old. [Lower Saxony State Archives of Stade, Rep. 5a, volume 220 No. 21]

In the description of 1691 Hinrich is no longer mentioned as a son of Jacob, because at that time he was already married and a farm owner. His age, however, is specified as 25 years. Jacob’s sons, Johann Quast and Bartelt, are named as 4 and 3 years (respectively). In 1695, a son, Jacob, was born. In 1716 he was 21 years old and succeeded his father in the office of judge. Mr Detlev Schulte in Daudieck reported his appointment by the court in “The appointment of judges and tax collectors [?] to Nincop” of 1716. He held the office until his death in 1741.

Altogether, father and son held the administration of the judge’s office together for 64 years.

According to the “List of required tithers, etc.” in the year 1720, the young Jacob was already the owner of the “Purten-Quast Farm.” According to the tax list of 1716, the heirs of the late Magister Johann Hinrich von Finckh (d. 1699) were the previous owners. The acquisition was with certainty made through a purchase.

The farm has been handed down since that time in a seven-generation succession from father to son and is now (1970) a quarter-millennium in the family’s ownership.